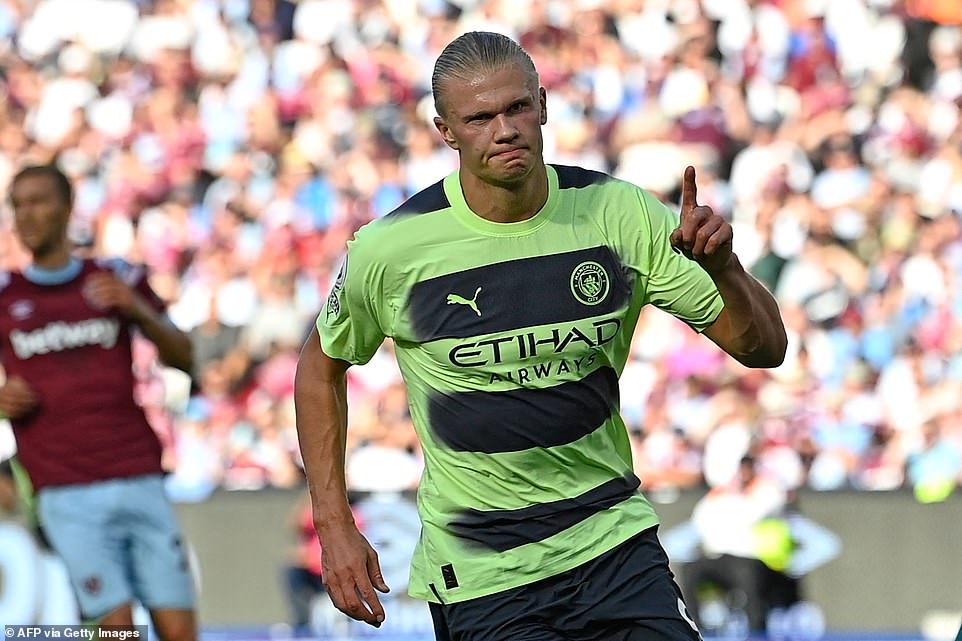 In Premier League history, only one other player has done so on his debut. Alexandre Pato for Chelsea against Aston Villa, April 2, 2016. OK, so that’s not the greatest omen. Pato never scored for Chelsea again and only played in other games. He ended up in China and for the past two seasons he has been with Orlando City in MLS.

We know that won’t be Haaland’s fate, not least because 30 minutes later he added his second. It was all arrival. It was what many feared, a signing that could transform Manchester City, making them even stronger, close to unbeatable. It’s too early to draw such dramatic conclusions, but they’re an extraordinarily good team and, with Liverpool already dropping points, one wonders what can be done to prevent a procession if they leave early.

They were helped, to be fair, by a very tame display from West Ham. There was little threat even when it became clear that the attempt to contain City had failed. West Ham looked happy to get away with two. Of course, it could have been more.

Notably for Haaland, who narrowly missed at the end of both, and headed in a Jack Grealish cross in the 70th minute that could have been his hat-trick. Just five minutes earlier he decided the game with City’s second and it looked rather ominous. A very fine ball from Kevin De Bruyne cleared it and, one-on-one with Alphonse Areola, Haaland planted the ball firmly in the far corner. In the stands, his father Alf Inge and his mother Gry Marita celebrated wildly. We imagine we’ll see a lot more of that this season; lots more of that too.

West Ham started well, really well in fact. Unfortunately, for them, that period of dominance lasted around three minutes, at which point normal service resumed, meaning Manchester City dominated. And that’s how it all started: the tsunami of passing and possession that defines this City side. It’s wonderful to watch, as a neutral or a purist, certainly as a City fan. For home maintenance, on the other hand, it is quite another thing.

The stadium becomes dim. Not exactly calm, but distracted as a crowd at Lord’s can sometimes seem preoccupied with more than events on the ground. There is a soft hum. Conversations happen, about who goes to the bar, what is required of the bar, are we ever going to get the ball back, go anywhere on vacation? And through it all, City are scrambling, probing, testing, pulling the opposition out of place, biding their time.

And, invariably, it comes. Perhaps that’s the kind of shot Kevin De Bruyne had after 14 minutes, screwed in alongside Joao Cancelo’s set-up when he’s usually so accurate; it may have been a Phil Foden cross, which Erling Haaland was unable to meet nine minutes later; or it could be a pass to the new striker, and the opposition’s nervous reaction to time chasing shadows against a Pep Guardiola side.

And, yesterday, it was the latter. Alphonse Areola was the culprit. He had entered after 28 minutes after Lukasz Fabianski gave up on continuing after a clash with Haaland minutes earlier. There was no fault. It was a loose ball, enjoyed by both goalkeeper and striker, and they bounced off each other. It’s a great unit, however, Haaland – it’s one of his many strengths – and Fabianski certainly came out injured. He had treatment for several minutes, tried to continue playing, decided against it soon after.

Vint Areola, Moyes’ first choice in cups, including the Europa League campaign last season. There’s a reason he doesn’t start more regularly, though. It was a horrendous decision making that brought Manchester City into the game. A through pass for Haaland, the giant striker rounding Areola, the goalkeeper reaching out a desperate arm to claw him to the ground. We don’t know if Haaland would have scored from this position. He was certainly in better shape with the ball on the spot from 12 yards. Top scorers imagine themselves from the penalty spot, and there’s no doubt who takes them to Manchester City. The ball went low to the left, Areola went in the opposite direction, City and Haaland were off target.

By now City possession was over 80 per cent and West Ham’s initial promise was much forgotten. It amounted to pressure from a set piece, prompting a clash between Ruben Dias and his own goalkeeper Ederson, who ended up with a minnow more commonly seen at York Hall down the road. Perhaps still feeling it, he didn’t come looking for a cross from Pablo Fornals and Michail Antonio headed just over. West Ham supporters must have made that memory last for quite a while, as City threw down their cover on the game. It wasn’t until Declan Rice shot from good position after 54 minutes that they had another chance.

Scroll down to see how it all went with Sportsmail’s live runner.