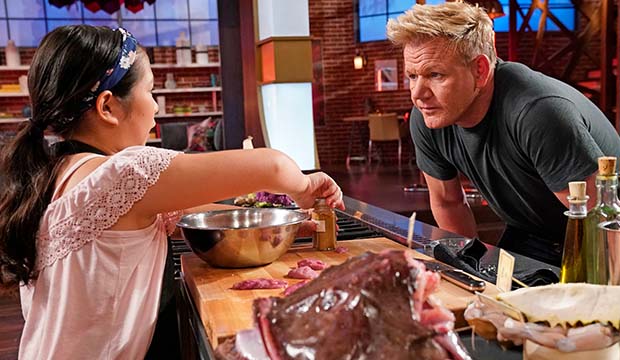 The top young home cooks ages eight to 13 have been chosen to compete in Season 8 of “MasterChef Junior” on Fox. Once again, Gordon Ramsay leads the jury and is joined by a renowned chef Aaron Sanchez and Emmy-winning talk show host Daphne Oz. The winner of “MasterChef Junior” takes home the coveted trophy and $100,000. They will also take home a brand new Viking kitchen, amazing counter top appliances, cookware, bakeware and a trip to Caesar’s Palace in Las Vegas.

TO SEE Aarón Sánchez on ‘MasterChef Junior’ season 8 and challenging Gordon Ramsay in the kitchen: “I could kick his ass”

Below, read our minute-by-minute “MasterChef Junior” recap of Season 8, Episode 4, titled “Junior Edition: Donut Holes & Hold Your Nose,” to find out what happened on Thursday, April 7 at 8:00 p.m. ET. /PT. Then be sure to talk in the comments section about your favorite young cooks on the Fox reality show and who you think has what it takes to win the whole contest.

Keep refreshing/reloading this “MasterChef Junior” live blog for the most recent updates.

20:00 — Previously on “MasterChef Junior”! Contestants were divided into two teams of seven and took part in a Renaissance festival, testing their abilities to cook for a crowd. When maclain realized that his voice was not strong enough to lead the challenge, he handed over his duties as captain to A’Dan, who led the red team to victory. The blue team led by Eva below. 11 years old Jillian was eliminated after failing to follow at the blue team’s rice station. From now on, 13 candidates remain in the running for the title “MasterChef Junior”!

8:05 p.m. – America’s top 13 junior home cooks step into the MasterChef kitchen. Gordon is delighted to announce that tonight’s special guest is his daughter, Tilly Ramsay. Tilly unveils a wall of delicious donuts, which elicits squeals from all the kids. Today’s challenge will be to make donut holes. They will need to make at least 50 of them, in two different flavors, and stack them in a nice pile. The Top 3 who impress the judges the most will win immunity. They have 60 minutes and time starts now!

8:10 p.m. – Tilly says if she was in competition, she would choose to make Lemon Vanilla Donut Holes. Andrew makes lemon donuts with macha and hibiscus glaze. Alright, Andrew! starla admits she’s not much of a baker, but she likes it. She makes holes in nutmeg and sugar donuts, but she also makes coconut! Her inspiration is the beach. Maclain makes Mayan chocolate and hazelnut donuts. Daphne seems particularly intrigued by Maclain’s flavors. freddy keep it simple with chocolate and vanilla because if you don’t like both, you like at least one. Freddy is already one of my favorite competitors this season, but he ups his game even further by flirting with Tilly. He asks Gordon’s daughter what she thinks of American boys and even offers to show her around Philadelphia. This kid is hilarious. Gordon cannot believe what is happening in front of him.

8:20 p.m. — There are 10 minutes left in the challenge and Gordon encourages everyone to move! Some cooks are really behind, notably Freddy who seems more interested in eating his donut holes than stacking them. There are a lot of kids who haven’t finished their stacks here, so it might get interesting. A few young cooks have done well, starting with Eva. She offers lemon poppy seed donuts and rose water donuts. Daphne says the frosting is a “total winner.” Tilly loves her rose water donuts. Next to highlight is Starla, which offers coconut donuts and nutmeg and sugar donuts. Gordon likes the lightness and says his tower is the most beautiful. Next up is Maclain, with their Mayan chocolate donuts and hazelnut donuts, which were glazed to perfection. Grayson is next, showcasing its Black Sesame Matcha Donuts and Blackberry, Lemon, and Thyme Donuts. Grayson always gets fancy with these flavors! Aaron loves it. Ivy makes strawberry and orange donuts with lots of sprinkles. Gordon tells her that her only criticism is to give them a bit more color to identify the flavors. Daphne loves the way Ivy cooked her donuts.

8:30 p.m. — The judges deliberate and decide which three young cooks will get immunity for this challenge. Eva, Ivy and Starla are declared safe and sound! The other contestants will compete in the mystery box challenge, but first they will all say goodbye to Tilly. The kids put on their black aprons and look nervous for this elimination challenge. Everything in that box stinks! When they lift their boxes, the head testers are terrified of finding monkfish, octopus, crickets, frog legs and various other smelly things. Gordon guarantees they can be turned into something delicious. Daphne says they have an hour to make a dish featuring one of those stinky, disgusting foods. It’s time to cook!

8:40 p.m. — Everyone is scrambling to find a delicious way to process these stinky foods. Daphne mentions how the kids are watching this challenge more than they have anything so far. They really want to surpass themselves. As each of them settles down and cooks, Abir slice his finger with a knife. Ouch! The 10-year-old stays calm, gets carried away and keeps moving. These kids take risks with these ingredients, but do it with confidence. Gordon seems most concerned about Maclain right now and Daphne thinks There is could be in trouble. Aaron thinks Freddy doesn’t have the knowledge to make this octopus salad. Time is up and the young cooks have all prepared their dishes. Who will face elimination?

8:55 p.m. — The judges are calling Freddy, who has made an octopus niçoise salad. He didn’t have enough time to fried the egg. Gordon says it doesn’t look good and wonders if Freddy really wants to compete. He urges the youngster not to sulk when he descends. On the other hand, Freddy cooked the octopus beautifully. Gordon gives him tougher love, telling Freddy he needs discipline. The next step is Molly, who made monkfish with homemade cookies, lemon aioli and coleslaw with red wine vinaigrette. Daphne doesn’t think this presentation is restaurant quality. Gordon calls it “ugly”. Aaron likes the seasoning of the fish, but he lacks the essence of the dish. Gordon says it’s the worst dish in Molly’s competition. Next, Maclain and his grilled octopus with spicy Israeli couscous, spicy chimichurri, baked Jerusalem artichokes and braised carrots. Gordon says there’s way too much couscous and he can barely see the octopus. Aaron says the Jerusalem artichokes are oily and the couscous is overcooked. There are too many elements that don’t work together. The last dish they want to take a closer look at belongs to Andrew, who made grilled octopus with glazed baby carrots, lime aioli, scallion pancake, and roasted jalapenos with chopped crickets. Gordon calls the veneer “a mess.” Daphne says the octopus is delicious in Andrew’s dish. Aaron says there’s “so much good stuff here” but it’s a “frustrating dish”. Gordon calls it “poorly executed”.

8:59 p.m. — The judges retire to decide whether Freddy, Molly, Maclain or Andrew will be eliminated. When they return, they announce that Maclain has been eliminated. Unfortunately, the major components of his dish were poorly executed. The stylish 12-year-old leaves the kitchen with his head held high. It’s a wrap for tonight. Only 12 young home cooks remain in competition.

Be sure to make your predictions to influence our reality TV race ratings for “RuPaul’s Drag Race”, “Project Runway” and more. You can continue to edit your predictions until each episode airs. You’ll compete to earn a spot on our leaderboard and eternal bragging rights. Check out our contest rules and chat with other fans on our reality TV forum. Read more Gold Derby entertainment news.

The Idea Village gets $400,000 to expand entrepreneurship programs

RAPTORS BLOG: There haven’t been 15 better NBA players than Pascal Siakam this season