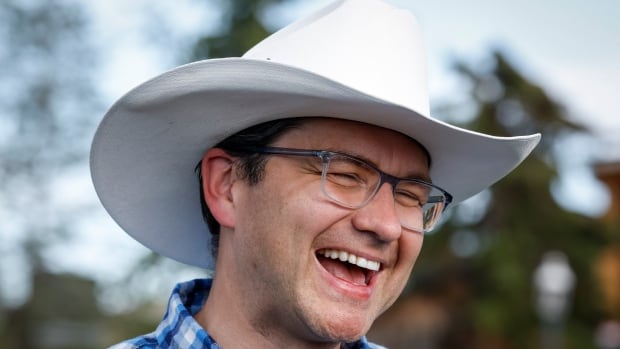 At a fundraiser for federal conservatives today, almost everything is designed to be a line of applause. Even the takeaway gift bags.

Visitors to the 1,400-person Stampede BBQ hosted by the Conservatives on Saturday night were offered gift bags, or tiny little wispy pouches to be more precise.

One said “get your hands off my six shooters”, another went with the intriguing (given it’s a federal party) anti-federal slogan “no more Alberta, less than Ottawa”. The other two took jabs at Justin Trudeau: “All, no cattle” and “Go ahead, Trudeau.”

Serving red meat is a no-brainer, both on paper plates and on the podium. You can never go wrong with that Calgary crowd praising oil and gas, mocking the Liberals and Trudeau, and attacking the media.

At the entrance, they give out gift bags with mints, a Canadian flag pin and a button of your choice.

I went with the one “Hands Off My Six Shooter” pic.twitter.com/F270kMsXmV

Introducing politicians at the start of pre-dinner ceremonies may seem designed to clap hands and boo supporters. Premier Jason Kenney received a solid standing ovation from that crowd, a reaction that perhaps seemed elusive among his provincial United Conservatives when they ousted him from office.

If this kind of audio poll turns out to be indicative of the outcome of a leadership race that won’t be settled until October, then first congratulations go to future United Conservative Party leader Danielle Smith, who was applauded much louder than the rest of the provincial pack, including distant decibel finalist Rebecca Schulz, perhaps benefiting from a bit of a boost from Rona Ambrose, the former federal interim leader, becoming its new president of country.

And then there was Pierre Poilievre, the widely perceived federal leader whose welcome among that crowd rivaled the intense, giddy enthusiasm for Stephen Harper, when he was prime minister and both host from hometown and keynote speaker for the annual Conservatives’ Big Summer Fundraiser.

The reaction to Poilievre’s presence at times made it difficult to distinguish this party-sanctioned fundraising event from a Poilievre campaign rally, those who began to draw attention to him as a candidate phenomenon.

Attendees lined the grounds of Heritage Park to meet him or take pictures with him.

During his six-minute speech — all of the federal leadership candidates got about six minutes of stage time — they clapped back as they introduced his mother. They cheered him on as they remembered a teenage summer job picking up trash on Stampede grounds. Applauded his promise to “make this nation the freest in the world” (it’s still unclear which nation Canada would snatch that title from).

It provoked laughter or applause almost every 10 or 15 seconds, building to a crescendo, quoting former Conservative Prime Minister John Diefenbaker: “I am a Canadian, a free Canadian, free to speak without fear…This legacy of freedom that I pledge to defend for myself and for all humanity.” The boos and whistles from the audience nearly drowned out his “thank you very much” greeting.

Two leadership rivals, Leslyn Lewis and Roman Baber, took the floor before Poilievre, and Scott Aitchison was eliminated at the last minute. So the unenviable task of keeping up with the apparent favorite fell to Jean Charest, the former Premier of Quebec and one of the only men present who overturned the tradition of cowboy dressing and arrived in a political standard navy blue blazer.

He took off the suit jacket to speak in his white shirt, and the Tories greeted him with several boos peppered with applause. He was boo before, when he called the February motorcade protest “illegal” at a think tank conference in Ottawa. In Calgary, the hostile response came before he even spoke.

It wasn’t generalized teasing, but enough that his first words were, “I’m glad to see you too.”

How does a Quebec politician make boos give way to better treatment? Filling a speech with sweeping promises to do what Albertans want Ottawa to do, things that are at the heart of Charest’s ‘Alberta Accord’ he shared before the Stampede columnist interviews.

“Do we need to label ourselves?

Early in the evening, the specter of hostility within the party figured prominently in interim Conservative leader Candice Bergen’s speech, including a lengthy section that appeased the crowd. It was about the risk of applying labels to Conservatives you disagreed with, and it was advice she had given privately to the caucus she trotted out in public in Calgary, probably in his last major speech as deputy leader.

“She’s a red conservative, she’s a blue conservative. She’s a libertarian, she’s a social conservative, and so on.” (Not mentioned by Bergen: the populist label, which is often attached to Poilievre, as to former US President Donald Trump, outgoing British Prime Minister Boris Johnson and Hungarian Prime Minister Viktor Orban.)

Bergen’s warning could cut in several ways. Some conservatives worry about a test of ideological purity in the wake of a Poilievre victory, after his campaign pilloried the more moderate Charest at first for serving as premier of the Liberal Party of Quebec, though during his reign, this brand was the main centre-right option in the province. , as did the ideologically conservative Liberals in British Columbia. Veteran MP Ed Fast, a supporter of Charest, quit as the party’s finance critic in May after feeling like he was a Poilievre supporter tried to “muzzle” his comments that Poilievre’s vow to fire the Governor of the Bank of Canada would damage Conservative credibility on economic issues.

Alternatively, it’s a cautionary tale for moderates who might question their desire to stay in a party led by Poilievre. A point Bergen made a little later underscored this sentiment: “If you want to do identity politics after 9/10, you’ll be left behind.”

A handful of Alberta Tories sported Charest buttons, most of them loyal to the former prime minister and Mulroney-era minister, and aware that his narrow path to victory does not include much Western support. In many observers the spiritsthat path narrowed further with the disqualification of Patrick Brown, absent at the party’s Stampede fundraiser (along with Calgary MP Michelle Rempel Garnerwho had backed Brown and recently wrote a blog post criticizing the CPC and UCP caucus cultures).

Quietly, many Charest supporters in the crowd said they saw themselves behind Poilievre if he won. Would they all, though?

As Bergen herself noted, rumblings of rift have continued to emerge since the CCP merged the Conservatives and the Canadian Alliance in 2003, but it never amounted to much. But of the three post-Harper leadership races, this one featured both the most apparent favorite and some of the most hostile rhetoric between the camps.

All we know for now is this: Charest’s boos were very noticeable. When Poilievre walked through the crowd, there was only excitement.