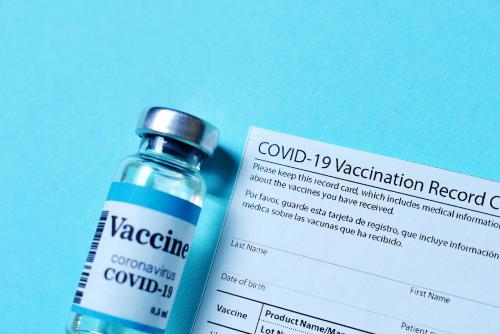 Just when you didn’t think things could get stranger, on Friday, January 21, 2022, the U.S. District Court for the Southern District of Georgia issued a decision clarifying its earlier injunction EO 14042 (currently on appeal to the 11th circuit, and previously discussed here) by refusing to clarify the injunction. Yes, you read that right. Let’s explain.

Following the issuance of its nationwide injunction and subsequent appeal to the 11th Circuit, the US government asked the district court to clarify whether the injunction applied only to the vaccine mandate or to the entire of EO 14042. According to the Georgia court, its injunction was intended to enjoin only the mandate of the vaccine. In other words, it does not enforce the masking or physical distancing requirements of the executive order.

The way the Georgia court “clarified” its earlier order is a bit convoluted. After first finding that it had jurisdiction to clarify its previous order, even in light of the pending appeal, the Court then concluded that a clarification was not necessary here because the injunction already contained the response to the US government investigation. According to the Georgia court, its injunction was meant to apply only to the vaccination mandate and leave the masking and physical distancing requirements of EO 14042 in place.

So where does this leave us?

From this blog, the Safer Federal Workforce has guidelines on their website which reads:

“For existing contracts or contract-like instruments (hereafter “contracts”) that contain a clause implementing the requirements of Executive Order 14042: The government will take no action to enforce the enforcement clause of the requirements of Executive Order 14042, absent further written notice from the agency, where the place of performance identified in the contract is in a U.S. state or outlying area subject to a court order prohibiting the application of requirements under the Executive Order (hereinafter, “Excluded State or Remote Area”). In all other circumstances, the government will enforce the clause, except for employees of the contractor who perform substantial work on or in connection with a covered contract in an excluded state or outlying area, or in a workplace a Covered Contractor located in an Excluded State or Outlying Area. .” (Emphasis added).

This is very flexible language, which can be read as saying (a) the government will not enforce its clauses in injunctive states or (b) the government will not enforce any requirement prohibited by injunction. Given that masking and physical distancing requirements are no longer prohibited by the Georgia court injunction, technically, the language of the task force can be interpreted as enabling these requirements to be enforced.

Leaving aside for the moment the Task Force Guidance and looking only at the various injunctions, here is where things are currently:

Order of Georgia: Enforces vaccination mandate in all 50 states; does not impose the masking or physical distancing mandate in any state.

“While there was evidence before the Court indicating that other COVID-19 security related requirements were also established as a result of the Executive Order (i.e. masking requirements and of physical distancing), the evidence and arguments presented to the Court in the parties’ factums and at the hearing on the Motion for Preliminary Injunction focused almost exclusively on the vaccination requirement, and the Court’s order on the Motion for Preliminary Injunction has not referenced, discussed or analyzed any of the other requirements related to COVID-19 safety.

Order of Kentucky: Enjoins “vaccination mandate” for all covered contracts in Kentucky, Ohio and Tennessee; it’s unclear whether it prohibits masking or physical distancing in those three states.

“The government is ENJOYED to enforce the Vaccination Mandate for Federal contractors and subcontractors in all covered contracts in Kentucky, Ohio and Tennessee.

Order of Florida. Enforces all aspects of the working group guidelines (vaccine mandate and masking/physical distancing) in all “in Florida” contracts.

Order of Missouri. Enforces vaccination mandate “in all covered contracts in Missouri, Nebraska, Alaska, Arkansas, Iowa, Montana, New Hampshire, North Dakota, South Dakota and Wyoming” ; it is unclear whether it prohibits masking or physical distancing in those states.

Order of Louisiana: Enjoins all aspects of the Task Force guidelines (the vaccine mandate and masking or physical distancing) in contracts between Louisiana, Mississippi, or Indiana (or their agencies) and the U.S. government. Note: This order only applies to the states themselves and expressly does not affect private contractors.

“[I]IT IS ORDERED that the Motion for Preliminary Injunction, Doc. 22, is AGREED to prohibit the National Government from applying the Task Force Guidelines and FAR Memo in any contract, grant, or other similar agreement under any other name, whether for services or products and that they are existing or new, between the requesting States or their agencies and the national government.” (Emphasis added).

Where do we go from here?

In light of the ever-changing federal vaccine landscape, we suspect most contractors will maintain the status quo for now — at least until the task force updates its guidance. In other words, we suspect that contractors will continue to apply masking and distancing if they have, and will continue not to apply masking and distancing if they have not. . That being said, in response to the federal injunction against the enforcement of vaccination mandate EO 14043 (federal employee), the task force issued a statement on January 24, 2022 stating that protocols relating to masking, distancing, to travel, testing and quarantine remain in effect, even if the government can no longer enforce the vaccination requirement. The task force may issue a similar statement regarding EO 14042, allowing enforcement of masking/distancing requirements for federal contractors, but at the time of this article’s publication, the task force has yet to do so. do. It’s hard to believe contracting agencies will suddenly start aggressively enforcing masking and distancing mandates without warning, so keep watching for updated guidance.

Here are some additional considerations contractors may want to keep in mind:

As federal contractors across the United States recalibrate their EO 14042 compliance plans, we’ll be watching the various appellate courts (specifically, the 5and6and8andand 11and Circuits) on whether they believed the President had the authority to issue EO 14042.

Important Note: This blog is provided for informational purposes only and does not constitute legal advice and is not intended to form an attorney client relationship. As you know, things are changing rapidly. This blog does not reflect an unequivocal statement of the law, but rather represents our best interpretation of the current situation. This blog does not address the potential impacts of the many other local, state and federal orders that have been issued in response to the Covid-19 pandemic, including, but not limited to, potential liability if an employee becomes ill, requirements regarding family leave, sick pay and other issues.