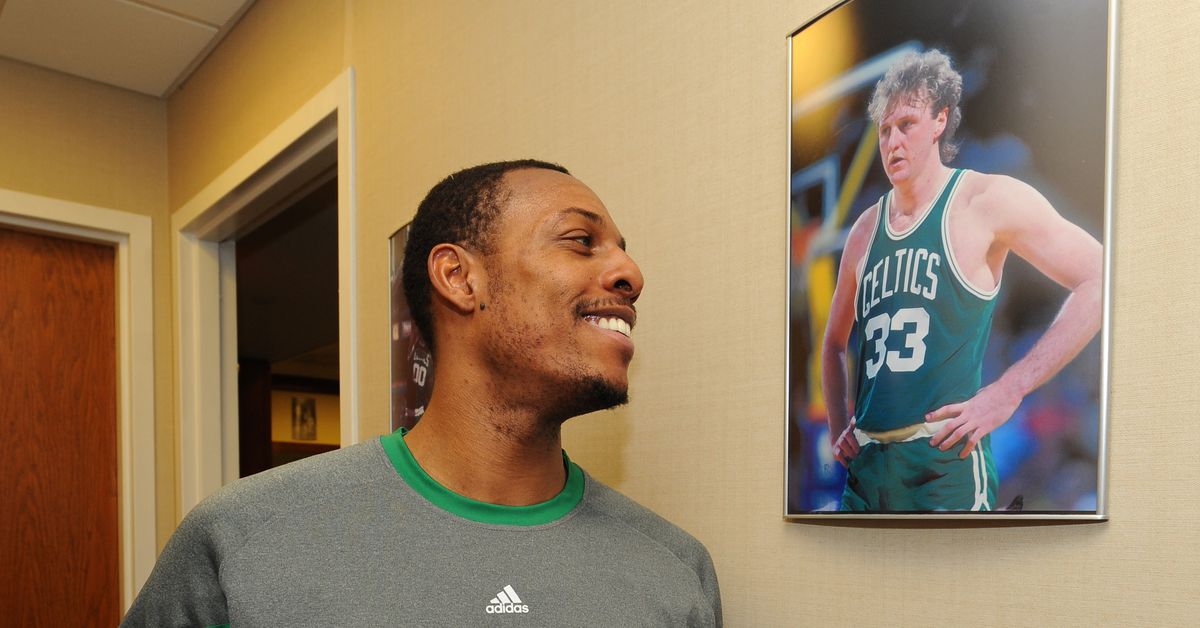 Generations CelticsBlog: Growing up green, the NBA in the information age and the summer of Kevin Durant

The game of basketball has evolved over the past 75 years and with it, its reach, coverage and the way fans consume the NBA. Here’s a candid conversation with three fellow CelticsBloggers from three different generations about how being a Celtics fan has changed over the years and how age and outlook have affected their relationship with the Celtics.

Bill Sy (46 years old): Mike, you’ve seen it all, but I’m curious what your first memory is of when you got totally addicted. What was that moment when you became a fan?

Mike Dynon (71): As a child, I was a baseball/football fan and I only discovered the NBA as a teenager. My best friend read a Sports Illustrated article about Frank Ramsey, the first Celtic to fill the sixth man role. My buddy liked it so much he decided to become a Celtics fan, so so did I. It was 1965, and few games were televised at the time, but I vividly remember watching Game 7 of the Finals, Celtics-Lakers in the Garden. It was Red Auerbach’s last game as a coach. Bill Russell was immense with 25 points and 32 rebounds, and I was amazed by his shot blocking. The Celtics won 95-93 and from then on I was all in.

BS: I am always jealous of reading your articles because they are so rich in first-hand detail. My experience was very different from yours. I grew up in Saudi Arabia and the only NBA games we had were Sunday replays and the occasional VHS my uncles sent us of All-Star Weekend and the playoffs. I will never forget watching Game 5 of the 1991 Playoffs against the Pacers where Bird fractured his cheekbone before halftime and came back halfway through the third. I haven’t had a chance to see many games, but I’ve watched this one a hundred times. What interests me is that you got into it quite late in life, as a teenager.

MARYLAND: Bill, yeah, I was about 14 or 15. I grew up in Brooklyn and the Knicks were terrible most of the ’60s, so maybe I didn’t pay attention. I knew the names of some of their players and I knew the Celtics won the title every year, but that was it. There was no 24/7 media where you could easily follow a sport or a team from out of town. I started buying basketball publications and listened to games with Johnny Most on the radio. And then I went to MSG every time the Cs came in, which at the time was about five or six times a season.

SB: It’s actually a perfect transition. I think when Mike and I were growing up, we starved for any Celtics content we could find. I remember cutting out scores and articles from Sports Illustrated and making these little yearbooks about each season. Now everything is at your fingertips.

Alex, becoming a fan in the age of the internet, what attracted you?

Alex Walulik (20 years old): I think the main draw was full and total access to everything. It’s so easy and it’s always been so easy for me to YouTube a post-game interview with a player, or watch a box score to see who played well on ESPN. For my entire life, I’ve felt like I’ve had a somewhat interactive and close relationship with the team and the players simply because of the exposure and attention they receive.

I have this pretty close relationship with the team because I’ve seen almost everything Jayson Tatum has said and done. I grew up with Marcus Smart because he spent time with the organization. Even with Jaylen Brown. None of this would have been possible without social media and the internet.

SB: Mike, do you think a lack of access affected your early fandom?

MARYLAND: It probably made me more committed, because I had to work on it. After high school, I chose to go to Boston University – I wanted to go there for several reasons, but the location was one of the most important. After graduating, I moved back to Brooklyn and started working in Manhattan. There was a newsstand in Times Square that sold out-of-town newspapers, so on Mondays I stopped there on my way to the office to buy the Boston Globe. I learned a lot from Bob Ryan. Alex is right, the internet and Twitter are such valuable resources. I don’t take them for granted.

SB: So that’s the heart of what I wanted to talk about. There was a mystique around your favorite players and teams. Now every little thing is sifted through. I’ve definitely become more of a fan of the front offices and the business of basketball, but sometimes I wish I didn’t have so much view behind the curtain.

AW: It’s so interesting also because a lot of people in the media want to capture what’s going on in a front office, because that’s something fans haven’t been able to experience until recently. GMs and POBOs go on podcasts, get interviewed, and have a huge presence in the media these days. Is it by choice? I think it depends on the person, but it’s the way business is done and it’s a major way to make money. All this to say that the NBA has become more of a business. It’s always been a business, but I think it operates more like a business now than it used to.

SB: True. Do you think it’s better for the game you fell in love with 60 years ago, Mike? I am ripped.

MARYLAND: Business has really always been an integral part of the NBA, the difference is that now it’s infinitely more complex. In the days of Red Auerbach, the primary goal of every franchise was to sell enough tickets just to stay in business. When a player’s contract expired, he was not a free agent. His only option was to visit Red’s office and haggle for an $8,000 contract, while Red offered $7,000. That’s why players like Tommy Heinsohn had to sell insurance in the offseason, and why Tommy and others fought to establish a players’ union and a pension plan. I miss the simplicity of those days, as well as a good quick three-on-two break that ends in a lay-up, but time flies. Basketball has evolved on and off the court. I accept that and still appreciate everything about it – even though I don’t understand the salary cap any more than I’m a wizard.

BS: I’m so curious how aware young fans these days are of the dollars and cents of it all. Even when I was in college, I don’t remember ever really hitting the salary cap. Sure, I marveled at seeing someone sign a multi-year contract, but that didn’t take into account how hard I rooted for the Celtics. Now the offseason is just as entertaining as the games.

Alex, you’ve grown to the age of tying a player’s points per game to the percentage of the team’s salary he’s on. How does that play into how you watch the game?

AW: I like to watch the game from a very analytical point of view. I’m not very keen on the salary side, but I pay attention to it because it’s something I want to do in life. But I’m certainly no expert. Where I consider myself quite knowledgeable is player analysis – and that’s how I watch the game. Does this player have this skill? Does this player need to develop in this area? It’s really a player assessment and the talent of these guys is pretty much why I watch the game. There’s just something so special about watching people master a skill and become so talented at something so difficult.

BS: Mike, how do you think the years have affected the way you enjoy the game? Has writing about it changed, for better or worse, your perspective?

MARYLAND: I’m an OG fan and blogger, and I’m proud of it. I write about the Celtics, their history and how that history relates to today. I don’t write about X’s and O’s, player ratings or salary cap maneuvers. There are more than enough other authors covering these topics. I would also pick up the NBA of the 80s in a heartbeat. Give me post-game, in-game, and referees making calls without going through the monitor.

That said, writing about gaming today has kept me in touch with current trends. As you’d expect, I’m an eye tester, but I’ve learned and understood how advanced stats, player tracking, and other metrics impact today’s NBA. So my view is better. I enjoy the game and the players today as much as I did in the past.

BS: So when this summer’s drama arrived with Kevin Durant and potentially Jaylen Brown, what was your first impression? Has being a fan for so long made you numb to roster turnover? Was Brown drafted by Boston and perhaps ‘our guy’ clouded your judgement?

MARYLAND: The first impression was “No!” Of course you’d want Durant on the Celtics – he’s a great historic player who still performs at a high level. But the price was too high at this stage of his career. He will be 34 this season and has suffered injuries for the past three years. Those in favor of the trade said Durant would secure a title for Boston. Not so. As big as KD is, he only won his two rings after joining a 73-win Warriors team that already had three all-NBA players (Curry, Thompson, Green).

Another argument was that Jaylen could leave for free agency in two years, while Durant is under contract for four years. It wouldn’t matter. KD is under contract now, but has always tried to force the Nets to trade him. What if Jaylen becomes a star in Brooklyn and Durant is unhappy again?

If the Celtics weren’t in the running yet, then maybe you’d be rolling the dice for a superstar. However, those Celtics made the final and added Brogdon (and Gallinari before he got injured) without hitting the core. They are now betting favorites to win it all. There’s no reason to give up on JB, more likely Smart or White and a slew of future top picks, when a title is already at hand.

BS: It’s a much more analytical approach than mine, Mike. I bet Alex had a more visceral response.

AW: I kind of grew up with Jaylen Brown. As a fan, I learned a lot about the game and decided to make a career out of it. So it was really just a shock because you never think it’s going to be one of your guys until it is. I have deeper thoughts on this that I have written. Once I thought about it more, my opinion went from shock to just trying to figure out the why of it all. But when the news first broke, it was mostly just a “wow” feeling.

BS: It’s funny. As I got older, I became much more sentimental. In my thirties, I was much more obsessed with results and winning. That’s all that mattered. But in my 40s, my relationship with the team is more like it was when I was a kid. The connection is more emotional. There was a time when I wanted to be a more intellectual fan who knew the cover sheet as well as the whiteboard, but today it’s become much more of a love story again.

A deficit debate is just what America needs

Redemption season for a more vocal Saquon Barkley? Why the Giants star is ready to prove the doubters wrong – New York Giants Blog