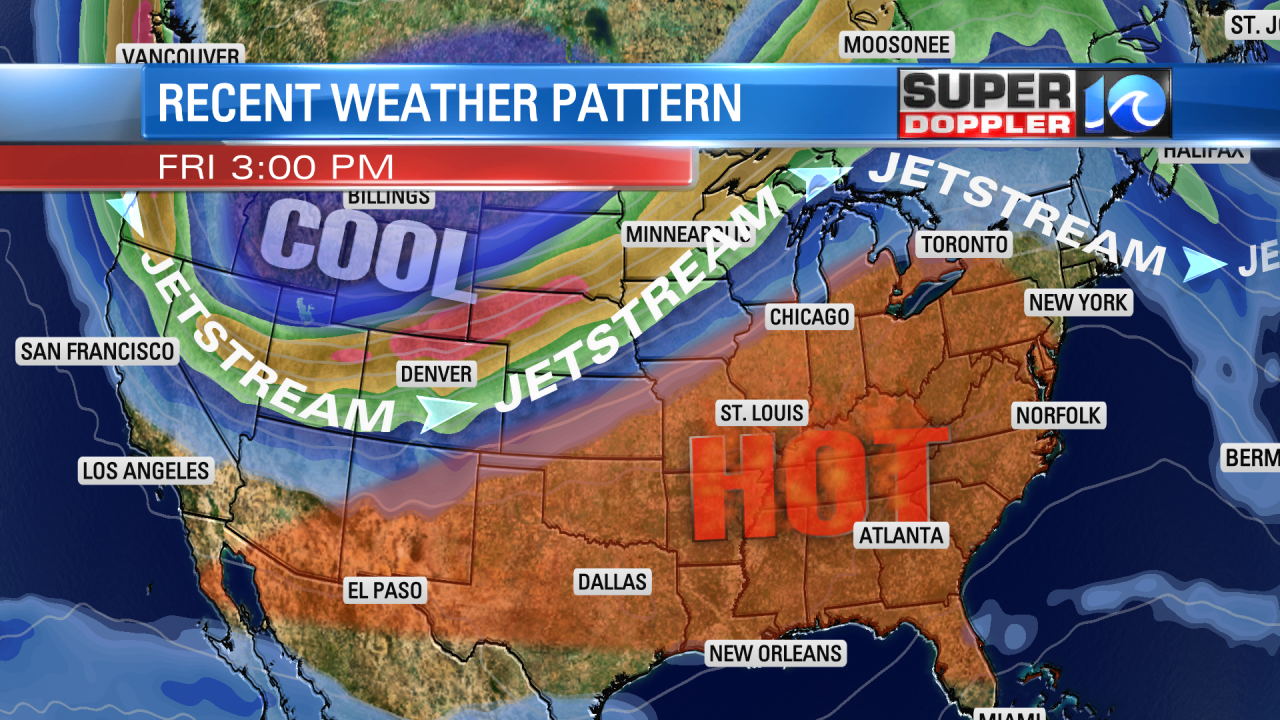 We are entering a real heat wave this weekend. Luckily, it won’t last too long. However, I think we are going to have a very hot summer as I read the tea leaves….

Yesterday we started to warm up, but the humidity still wasn’t too bad. Also, there was a breeze.

Today will be a different story. We have a warm front moving slowly to our north with high pressure to the southeast.

Meanwhile, above our heads, the jet stream is rising far to our north. This “riding” will limit the amount of rain and cloud in the area today.

Recent heat that has settled over the central United States is pouring eastward. Keep in mind it’s been hot over parts of the Rockies lately too, but they’re actually expecting a snowstorm around Denver. Here is an article with more information about it: Snow in Denver.

Back to our heat… We started this morning with partly cloudy skies and temperatures in the 60s and 70s. We were already hitting the upper 70s by 8:30. We will be targeting the low to mid 90s this afternoon with some mid to upper 90s inland.

The average high temperature for this time of year is in the upper 70s. Today’s record is 98, set in 1996, so we probably won’t equal that record. It won’t help that there will be a fair amount of sun. In addition, there is much less wind. It will only come out of the southwest at 5-10 mph.

Tomorrow, the heat will increase again. High temperatures will run more into the mid 90s. The heat index will likely be near 100.

The record temperature for tomorrow is a little lower. It’s 94 Degrees (1996: Norfolk). So we’ll probably tie or beat that record. We will have a near-rehearsal for the weather. The sky will be partly sunny with a light southwesterly wind. There may be a downpour or a stray thunderstorm. However, I expect there will still be some showers and thunderstorms tomorrow evening.

We will be a little less hot on Sunday. High temperatures will be closer to 90 degrees, but the heat index will still be in the mid 90s. We will be partly cloudy with a few showers and thunderstorms late in the day. Chances of rain will increase Sunday evening as a cold front moves through the region. It will really chill us at the beginning of next week. High temperatures will be in the 70s on Monday and Tuesday with mostly cloudy skies. We will have scattered showers both days.

Be sure to treat heat with respect. Don’t take it for granted. Stay hydrated! Take plenty of breaks in the shade. Keep pets cool and hydrated too.

In the regional news… We’ve brought down the ongoing drought in some places this week, but it’s still going strong (unfortunately) in parts of North Carolina.

We’ll have a decent chance for some more rain next week.

Money, the environment and soy