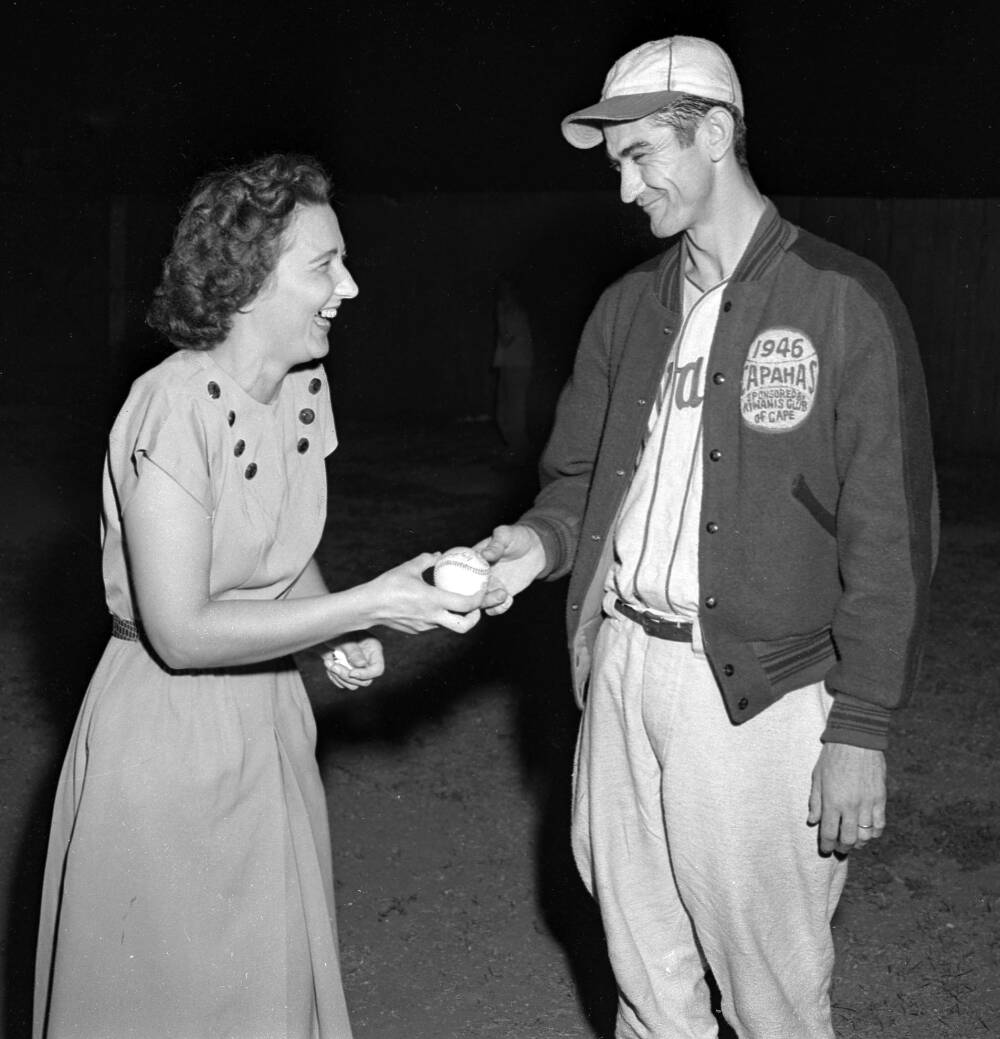 Blog: Capaha alumni play for the benefit of cerebral palsy (7/26/22)

Capaha baseball legends Lewis “Lou” Weiss and Roy Smith faced off on the field of Capaha Park in July 1972, throwing teams into a charity alumni game.

Weiss and Smith played together for several years, but they were contestants in the contest 50 years ago. No doubt many stories were exchanged by the players in the dugouts and on the pitch.

The Lou Weiss-Roy Smith combination of the 1940s was well known, not only in the southeast Missouri area, but throughout the Midwest.

Smith, acclaimed by diamond enthusiasts in that area as one of the finest in the entire southeastern Missouri district, began his pitching career in Jackson, his hometown, in 1930, but quickly branched out to better things, signing with the St. Louis Browns in 1944, and playing for the Toledo Mudhens, who were training at Cape Girardeau at the time.

But, due to lack of pitching assignments, he was placed on a voluntary retirement list, returned to Cape County to pitch for the Cape Girardeau Capahas, McClure, Illinois and Farmington Missouri teams.

Around the same time, another guy was gaining recognition as a pitcher, Lewis “Lou” Weiss, who also carried a big tick at home plate and acted as a catcher when he wasn’t on the mound.

Smith and Weiss have played together for several years, but on Saturday night (actually Sunday. The match was moved back a day due to wet pitch conditions. — Sharon) in some sort of Capaha reunion contest, they will be opponents in the benefit game Cerebral Palsy will take place at 6:30 p.m. at Capaha Park.

Elam Vangilder will also be in attendance for the big occasion, which pitched for the former St. Louis Browns and faced some of the best players in the major leagues. Vangilder will kick the ball on Saturday.

Without a doubt, Vangilder and Smith will have a lot to say to each other. Smith beat Vangilder twice, while the former pitched for the Caps and the latter for Gordonville.

Weiss’ reception on Saturday will be Albert “Junior” Gross, an infielder who always “grabbed” Weiss when the pair played together. The second half of Team Smith’s battery will be Clarence Wessell, another Capaha alum.

HT Miles, who managed the Capahas during a time when Smith and Weiss were playing, will manage Team Smith on Saturday, while Weiss will take on a player-manager role for the team.

The “Doc” Miles crew will be stationed in the third base dugout in Capaha, with the Weiss crew on the first base side.

After the alumni contest, the current Capahas will host a much-loved team from Carbondale, Illinois.

Capaha’s hopes were boosted this week when pitcher Don Miller returned from Chicago.

“He’ll be with us for the rest of the season,” coach Jess Bolen remarked, “and it comes at the right time. We enter the state tournament in mid-July.”

Other pitchers on the current team include Tom Reinagel, Kim Godwin and Gene Schlick.

ANCIENTS HAVE THEIR DAY

There was that time when Roy Smith was a pitcher with the Toledo ball club. Now everyone knows a baseball player needs to sleep, and that’s what Smith was doing in the dugout one afternoon when his manager yelled:

“Hey, Smith, are you sleeping?

“So go out and practice first base.”

Smith put in his effort and slowly made his way to the first base line.

Then he realized that the other team was hitting.

Then there was Don “Diz” Anderson, who played for the Cape Girardeau Capaas several years ago. Perhaps he was daydreaming one afternoon when he was called upon to pinch. Either way, he made his way to the plate without his bat.

“Hey, Don,” a teammate chirped. “No wonder they call you Dizzy.”

They still tell the story of Lou Weiss, an afternoon when he faced the famous Rogers Hornsby.

“Someone told me Hornsby couldn’t hit the sharp outside court,” Weiss said. “He was standing way back in the box, and I could see that might be true.

The first three times, however, Weiss threw inside and Hornsby smashed the ball, only to be caught in the outfield.

“Then I decided to fan him the fourth time he came,” Weiss said. “I had two strikes on him, so I served him that outside pitch that he couldn’t hit. He sent it over the wall in the center pitch.”

Fascinating tales, colorful anecdotes and a few snippets of humor flowed freely through Capaha Park on Sunday afternoon, as “oldies” gathered to play the cerebral palsy benefit game. On site were players from former Capaha teams.

Many fellows have logged playing time with major league farm clubs at one point or another.

Roy Smith was there and was the starting pitcher for HT “Doc” Miles’ team. Lou Weiss was there to pitch a team he was coaching.

Once in past history, Smith and Weiss faced off on the mound. For most of their playing days, they were teammates, sharing pitching duties, with Weiss taking turns behind the plate to catch strong pitcher Smith.

But, one day in the late 1940s, Weiss was pitching for McClure, Illinois, and Smith was hurling for the Capahas.

In veterans action on Sunday, Weiss had the edge over Smith after two sets. But, then Ed Rellengert took over for Doc Miles’ side, and a Gordon McBride home run in the third blocked the count at 1-1, and so the four-inning contest s ‘is finished.

The many fans who turned out to see the stars of the former performance may have been taken aback by the teams defense.

The Miles-coach team played a double play in the third inning when Walter Ford slammed a ground to first baseman Jim Drury, who picked it up, shot to second to get the first runner, then returned to the first to take McBride’s throw for the double play.

“A double game? Weiss exclaimed. “Who ever heard of a double game in an old game?”

Team Weiss’ Bob Miller had a stellar catch from a line drive in the second inning, and Weiss’ shortstop Allen Hill provided some great field saves to take out the runners.

Team Weiss scored their run in the first set when Yalally walked and Walter Ford doubled up. In the second frame, Hill and Mabrey started with back-to-back singles. After a play from defenders, Weiss walked to charge the bases. But, Mr. Smith fanned the next two batters to end the threat.

Weiss, throwing lots of changes and curves, allowed only one hit in the four-inning smash, but it was a home run.

“Lou threw my favorite pitch at me, a fastball about a letter high,” McBride said. “I just hit it, and it’s gone.”

The ball cleared the field fence to the center right.

“I hadn’t walked with anyone and didn’t want to,” Lou said. “I had a 4-2 count on him (McBride), so instead of trying to curve him, I just whipped him up there.”

There was no winner in the game, but the cerebral palsy fund came out on top. All proceeds from the game went to the cause.