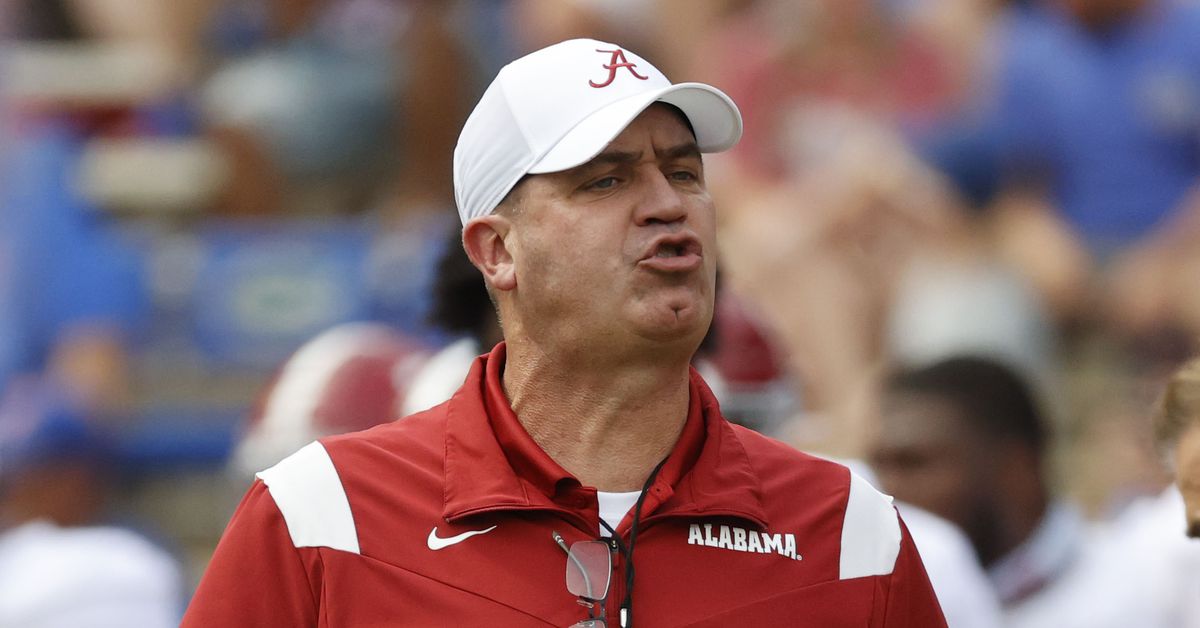 Arguing With Myself: Regarding Billiam (O’Brien)

Every once in a while, there comes a point in a person’s life when you discover information and you just have no idea what to do with it or what to think about it. You have two opinions on how to deal with this new information and these two minds are in absolute conflict with each other.

Guess I should start with the news. In case you haven’t heard, in recent days former Texans head coach Bill O’Brien, currently offensive coordinator at Nick Saban Rehabilitation Center and Spa for Wayward Coaches, has piqued Trent Baalke’s interest. , the general manager of the Jacksonville Jaguars to be their next head coach.

Usually rumors like this die quickly and I wouldn’t think about it. But now that interest also comes from their owner Shahid Khan and his mustache (the mustache has veto power in all business decisions). So it’s quite possible that we could see our former favorite teal head coach coaching an NFL team (technically), a team that we would see twice a year for maybe the next 15 years.

Dear reader, these past few days, I disagree with myself on this. And when that happens, I like to express my thought like pants stuck in a sewer pipe.

Here is a transcript of that “conversation”.

TexanUprooted (it’s also me): What?

UT: We might not be done with Bill O’Brien after all.

TU: What do you mean?

UT: Do you see that?

TU: Soooooooo what’s the problem? It’s the Jags. Do we really care about this?

UT: I don’t know, I guess I feel a little bad for Jags fans because they might end up with our freebies.

UT: Because the Texans made him a thing and his lust for power destroyed that franchise for the foreseeable future.

TU: How bad is that?

UT: Because look at these poor [kittens]. They’ve had enough garbage for aâ€”

UT: – two decades. Hiring BOB will only send them further down the rabbit hole. Plus, I hate the idea that he can readjust into something that looks like a competent head coach in the span of just one damn year.

TU: But that’s their problem, not ours! If anything, we should be popping corn to watch him start another trash fire on another professional football team.

TU: Withdrawn. But my point holds. We shouldn’t feel bad for them. If anything, we should take advantage of someone else falling into the same pit we fell into in 2014. I’ll get the popcorn and some comfy chairs.

UT: Isn’t that kind of like picking on the kid who eats dough in kindergarten? They are such an easy target and they’ve been at the bottom of the league for so long that it almost doesn’t feel funny to see them struggle with BOB.

TU: Dude, we’re still coming out of the chasm that [kitten] knocked us down, made worse by Jack Easterby, whom he “stole” from New England, constantly pouring more sand into it because Cal McNair thinks it’s a [kitten]Sandbox. Jags might be the dough-eating kid, but Texans are the farts-busting kid in class during naps.

TU: You are right, it might have been a bit far. There must be a team that everyone must look down on. It’s just the natural order of things. It’s like I’m getting mad, I kick the dog. The dog, in turn, bites the cat. The cat then slides over the rat and the rat bites the Jacksonville Jaguars. That’s just how it works, man.

UT: Very true. That doesn’t mean I like him.

TU: But let me ask you this if you’re still not convinced: if you’re that concerned about the Jags, do you think they were concerned about the Texans when BOB was consolidating power at the front office and drafting absolute garbage? Were they sympathetic when we watched BOB play Tom Savage and [UNPERSON] Who was he claiming he could turn into real, legitimate starting quarterbacks? Ohhhhhâ€”

TU: I just realized something. If the Jags hire BOB, he will report to Trent Baalke.

TU: Baalke got caught up in a huge power struggle with Harbaugh in San Francisco. If they hire BOB, he might find himself in another power struggle! Oh my [Durga], they have to hire him! Please please hire Bill O’Brien.

UT: You really don’t feel any mercy for them, do you?

TU: If they existed, I could do it. Besides, have you thought about that? The last coach they hired was a complete wreckage of a human and won both Jags games this year alone. This is the only team in the league where the hiring of Bill O’Brien would be a step up from what it is now.

TU: Plus, it’s a lot more fun watching someone you know to be football poison corrode and tear down a different football team than the one you care about. That’s what makes him funny!

UT: I guess. I just wish he’d been hired to be Belichick’s coach in the meantime. See real chaotic [kitten].

TU: In a just world, it could happen. That’s not it, poindexter.

UT: So I should go ahead and hope they hire him and watch the mess ball emerging in North Florida?

TU: Well … yeah. Bill O’Brien coaching another team is the pinnacle of schadenfreude. It’s the best entertainment we’d probably get next year, better than what we can probably expect from the Texans next year.

UT: You’re way too excited about this.

TU: Well … yeah. I like chaos and disorder. They are funny ; especially when it happens to someone else.

Ah, it feels good to get that out of my head. It kind of relieves the pressure, like trephining with words.

What do you all think of it? If the Jags hire BOB, should we laugh at our collective? [kitten]s off? Or do we feel the slightest hint of pi â€” sorry, I couldn’t finish that thought. Anyway, let us know what you think or if you think anything about it.