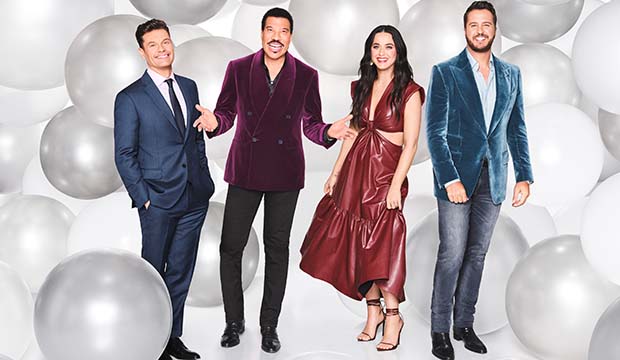 Follow our ‘American Idol’ Season 20 Episode 19 recap as the Top 5 travel to Las Vegas to be mentored by the country superstar and 2005 ‘American Idol’ winner Carrie Underwood. Each contestant will perform two songs, leaving everything on stage in hopes of winning the American vote and securing a spot in the Grand Finals.

This season, the judges embark on a new nationwide search for America’s next musical sensation. Auditions were held in Nashville, Tennessee, Austin, Texas and Los Angeles, California. If given a golden ticket, hopeful idols qualify for the Hollywood round. In a new twist this season, three contestants received a platinum ticket, allowing them to skip the first phase of Hollywood week. Kenedi Anderson withdrew from the contest on April 11. Jay reached the Top 7 and was eliminated on May 8. huntress is still in the running.

Below, follow all the action from Night 19 of Season 20 of “American Idol.” Timestamps are in Eastern Standard Time. Hit refresh to see the latest thoughts on the top 5 performers!

20:00 – Previously on “American Idol”, the Top 7 performed for America’s vote. After Seacrest announced the Top 5, we said goodbye to Christian Guardian and Jay. Who will shine brightest tonight? Let’s go!

8:12 p.m. — The evening begins with an excerpt from Carrie’s pretty epic career. She truly had the dream career that all of these candidates are hoping for. Each artist will sing a song from Carrie’s songbook tonight. Huntergirl leads with “Undo It,” and Carrie teaches the budding artist how to strut and bring the nerve to this song. For the live performance, Huntergirl makes her way through the crowd and onto the stage. It’s an uptempo song that has more sass than heart, but it’s actually one of the best Huntergirl vocals of the season. At the end of the performance, Huntergirl holds her fist up and looks like a ton of bricks have been lifted from her shoulders. Lionel says, “There’s nothing better than owning the stage. It was spectacular! Katy says, “You invited us to your party. She also calls it her “best performance by far”. Luke mumbled a few compliments, he might be better prepared for the next performance, but he liked it.

8:22 p.m. — Lea Marlene is then performing “I’ll Stand By You”, which is a song Carrie covered at an inspirational charity event. Carrie admits she struggled to find her own artistry until she was on “Idol,” but Leah already has it. Leah says her 8-year-old self is “shaking inside.” Lea looks wonderful. I actually think she has the best voice in the competition. You can never mistake Leah for anyone else and she pours her emotions into every lyric. Katy can’t believe how Leah reinvented the song. Lionel calls Leah a great “stylist” and says her delivery was “on point”.

8:30 p.m. — The next step is Fritz Hager, who is back in the studio after his battle with COVID-19. He will sing “I Wanna Remember”, a song on which Carrie collaborated with NEED TO BREATHE. I don’t think that’s a good song choice, but I guess Carrie Underwood’s songbook might be a little tougher for the men in this competition. It’s just kind of forgettable and his voice doesn’t blow my mind. He might be a little hoarse. Either way, he’s still my pick to win this season, so I think he’ll be safe even if it wasn’t his best performance. Luke calls it a “great rendition” of the song. Lionel says Fritz has the ability to switch gears from song to song and congratulates him on his career. Katy calls it “effortlessly cool.”

8:42 p.m. — Noah Thompson will sing “So small”. He was a little too sick to be in person during his mentor moment with Carrie, but at least he’s in the studio for his performance tonight. Carrie relates to Noah’s story and is moved to tears by their similarities. Noah becomes much more comfortable on stage, but he doesn’t give his best voice throughout the first half of the song. He picks it up at the end and I still think this kid has the charisma to break into the finale. Lionel says that Noah is actually a “real person”. I don’t know who the other competitors are. Katy says people are obsessed with Noah and he’s getting better every week.

8:54 p.m. — Nicoline closes the Carrie segment with a cover of “Blown Away”. She knocks it down and makes a ballad out of it, which Carrie enjoys. For the performance, Nicolina sings the version Carrie fans are familiar with. It’s not a ballad, but the power is still there. She’s kind of all over the place at the end of the song and she inserts more tracks than the song requires. It wasn’t my favorite Nicolina performance. Katy compliments the fan blowing on Nicolina’s hair and cape. Lionel likes his attitude and tells Nicolina to “stay in that pocket”.

9:09 p.m. — FINISHED stops to sing their brand new single, “Naked”, before the competition resumes. Then Leah Marlene takes the stage for a performance of “Separate Ways (Worlds Apart)” by Journey. I think she is phenomenal. I love the choices she made and the way she changed the song, but I don’t think I would have chosen the song for her. Luke calls it “refreshing and fun”. Lionel says she has a career now. Katy loves seeing Leah’s teeth! Things get fierce in this competition.

9:20 p.m. – HunterGirl is next with a rendition of “Girl Crush” by little big city. The opening chorus is perfectly executed and it’s a great song choice. Lionel calls her sound “clear” and says HunterGirl has the rest of her life to enjoy her career. Katy says she has a crush on a girl and her nieces vote for HunterGirl. Luke says she’s in star mode.

9:33 p.m. – Fritz is ready for his second round singing “Youngblood” by 5 seconds of summer. When I look at these contestants, Fritz is the one I can immediately see as a real pop star. He could stand there right next to Ed Sheeran and fit in. When he sings contemporary hits like this, it only confirms that thought. It works the crowd like a pro and sounds great. Katy asks, “Have you had that up your sleeve the whole time?” Luke needs the show to forever remove the clip of him saying “No” to Fritz during his audition. The crowd is going crazy for this kid.

9:43 p.m. – Nicolina will then sing “All I Ask” by Adele. It’s a beautiful ballad for her. She’s covered Adele before, but that was a long time ago on the Hollywood Showstoppers Tour. It’s a powerful voice that could easily launch her into the finale. This Top 5 is so close! I really have no idea which two are coming home. I love how Nicolina just lets herself be ripped apart at the end without worrying about achieving perfection. It sounds raw, but it’s still in tune. Lionel calls it an “American Idol” treasure moment. Katy says Nicolina didn’t come here to play!

9:53 p.m. – Noah’s last chance to prove he deserves a place in the finals is with the song “Working Man” by Larry Fleet. It’s the best it’s ever sounded. How can he lose his place in the final after that? Wow. This may be the closest Top 5 I can remember. Lionel encourages everyone to vote for Noah if they want to see more. Katy says he “passed that test.” Luke says Noah could fit any place in any world he finds himself in. Who will be part of the Top 3? I could see any combination of them pass! We will know the results in a few minutes.

9:59 p.m. — The results are in and Seacrest announces the Top 3: HunterGirl, Noah and Leah! That means we’re losing Fritz and Nicolina tonight. I’m shocked that Fritz is going home, I thought the audience liked him tonight. And Nicolina probably gave the best vocal performance of the night. Well the top 3 are all very deserving and I could have seen that play out with any combination of competitors in the final. Congratulations to HunterGirl, Noah and Leah!